:-( we're no longer playing in Oxford. but there's lots of other places to go!

Unfortunately, everyone playing in Oxford has now moved on to different things. That's sad. But the great news is that the sport is growing really fast in many other places around the country.

Here's some great resources/courses to help you get your disc golf fix:

Good luck and keep throwing the discs!
Posted by Andy at 1:05 PM No comments:

It's Spring 2012. It's starting again. To recap: george won the 2011 Oxdisc Summer League. Here he is with the cup he's now won more times than anyone else. Well done George. Final scores are on the main dashboard which you can see by clicking here.

These are based on the BEST five scores in last year's league. This will mean it is much harder to get a negative score this year, but it will be the same for all of us.

The rules:only rounds played on Wed pm and Sunday am count towards the summer league. One of the players is responsible for entering the score into the Summer League spreadsheet (link available from Andy). If you play a blinder and it doesn't get entered, don't blame me! At the end of the Summer (ie when the clocks go back) best score wins!

About 8 more weeks to go and George has a pretty solid lead. Not only has he played lots, but if you look at his averages over time, he's the only player consistently improving each year. Dave looks good, but hasn't got enough rounds under his belt. Steve could take the lead if he could just get a few good rounds in.

As for my performance this year? Even worse than last year... Did anyone find my mojo somewhere? I must have left it at a tournament a few years back!

Powered by Tableau
Posted by Andy at 1:37 PM No comments:

On Wednesday evening we had five beginners come for a round of disc golf! Along with some 'regulars' Andy, Ben & George - we were able to split into two groups of four so things didn't get too chaotic.

The final scores were :

* Pablo has been coming along for a few weeks and been improving greatly!

It's an absolute pleasure to have new players along - it's great seeing people throw a frisbee further than they ever thought they could! Also, spending an evening wandering around a park can never be bad!

Over the years - we have amassed a large number of discs that we can lend to new players, so all you have to do is turn up and we'll have you throwing frisbees into trees, bushes & ditches in no time. Just let us know beforehand so we can pack some extra discs for you!
Posted by benfoxall at 1:41 PM No comments: 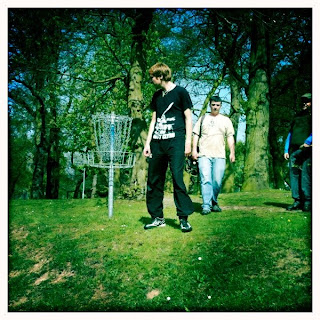 Chris - Int. Ams. winner
Three oxdisc-ers (Andy, Ben & Chris) went to the Essex Open this weekend.
Chris stormed the Int. Ams with a consistent set of good rounds. His six hole final didn't go so well - though a comfortable lead and awesome caddies (Andy and Ben) meant he still came out on top.
Ben was playing rubbish disc golf, throwing the cornerstone of his game (a 'perfect' roc) into a lake after 4 holes. Andy got a birdie on some hole and then; umm… other things happened.
The whole weekend was a lot of fun. Good chats, beer and disc golf. We're unlikely to make the next tournament (on the isle of Mull) - so it's back to the oxdisc summer league till June!
Posted by benfoxall at 11:39 AM No comments:

Email ThisBlogThis!Share to TwitterShare to FacebookShare to Pinterest
Labels: tournaments

So you want to know more about disc golf? Well, here's a video from a couple of years back that gives you more info on the sport:


In Oxford we play on Sundays throughout the year. We tee off at 10am, so get there about 10 minutes early. During summertime, we also play on Wednesdays, teeing off at 6.30pm. If you want to come and try it out, email Andy (andy.cotgreave@gmail.com) beforehand to be sure someone will be there, and so we can bring some spare discs for you to try out. We meet in Headington Hill car park.

If you get keen, there's a UK tour and plenty of other courses around the UK. Quarry Park in Leamington Spa is the best disc golf facility in the UK, and only just up the road.

Here's another that shows you what a full-on championship tournament is like:

Four brave souls managed to squeeze in the first round of the summer league yesterday. We're off! Contact us if you want to play. We tee off promptly at 6.30 on Wednesdays and 10am on Sundays. We meet at the HEadington Hill car park: click here.
Posted by Andy at 3:34 AM No comments:

Contact me (andy DOT cotgreave AT gmail DOT com) for details.
We tee off at 10.00am every Sunday, meeting at the Headington Hill car park (click here) In the summer, we also tee off at 6.30pm on Wednesday evenings.

We tee off promptly, so turn up early in order to start on time!

Please contact us beforehand if you want to come and play.